What a fabulous day. What a great atmosphere. What a great cause. Three thoughts I had as I drove away from Manor Farm Lakes in Bedfordshire having just attended the 2014 Carping4Heroes event writes Brian Skoyles. 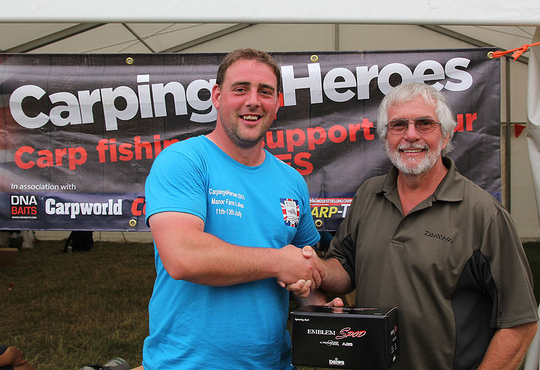 Carping4Heroes is a charity event which aims to raise money for Help the Heroes. It’s a match for carp anglers but it isn’t just about the fishing, it’s about people coming together and celebrating our armed forces through carp angling and having just spent the day with all the competitors I can vouch for the fact that they are doing just that!

The weather was hot, very hot, which as I walked around the lake was having a huge impact on the fishing. The carp were sunbathing rather than feeding, but for those feeding floaters there were a few fish prepared to feed.

Back at the marquee I spent a couple of hours running a casting accuracy competition, fairly light hearted, with some brilliant banter, typical of the event overall. I think it’s fair to say that winner Ben was well chuffed with the Emblem Spod Reel he won, despite the barracking from his “mates”.

Early evening was a chance for everyone to have a break from the fishing and get together for a barbi and a Q and A session with guests Gaz Fareham and Adam Penning. I had been asked to host the Q and A session, which in theory was an easy job except it wasn’t always easy to get a word in. Gaz and Adam did a great job and it was interesting to hear their views on a variety of topics.

We finished the Q and A and everyone disappeared back for part two of the match. I had a quick walk round the lake, said my goodbyes and then it was time to head back up the motorway.

It had been a brilliant day in all respects, the banter, the enthusiasm, the money raised. It was great to catch up with several friends I hadn’t seen for some time, it was also humbling to see how members of our armed services, some coping with serious injuries just take everything in their stride.

A big thank you to Simon Bangert for both the invite and the huge amount of work he does in organizing the event… it was a privilege to be involved. 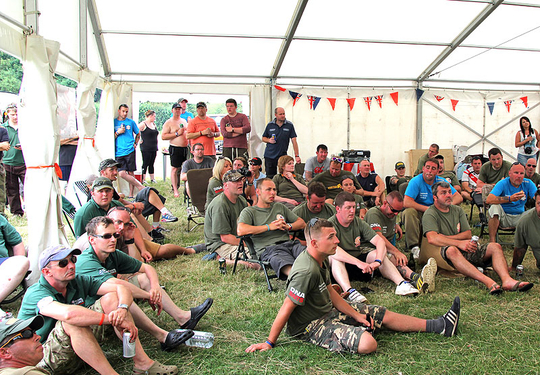 Tue March 2020
One of the first Irish Festivals of 2020 took place on Inniscarra lake over the past weekend. Daiwa consultant Cathal Hughes was defending the title he won back in 2019 and here he gives us a brief insight into how things went.
Read article »

Wed March 2020
I love my winter perch fishing, although I will admit that this year, I’m getting a bit fed up with the seemingly never-ending wet weather and mud. Tactics are relatively simple either float fished or running legered using raw prawn or worm as bait. Perch seem to have a greedy streak and once found, can normally be tempted into making a mistake. So, to my mind, location is the key to consistent success.
Read article »